A Community Based, and Non-Profit Organization

Hapa, Mzungu! (There, a white person!)

Sorry it's been such a long time since my last posting, but alot has happened in the past week; needless to they there hasn't really been much time for sleep. Last Saturday we drove to the nearby Lake Manyara National Park and went on a game drive. During our 6 hours in the park we saw about 35 elephants, 60+ Giraffe, too many Baboons, Vervet Monkeys, 50-60 Hippos, tons of Zebra, Blue Wildabeast, Water Buffalo, various birds, Jackals, Ostrich, Warthogs, the list goes on. Growing up in America, its been commonplace to watch these animals on TV or in a zoo. It's one thing to recognize that animals like these exist, and another to feel your heart drop in your chest as a Bull Elephant passes in front of you- debating whether or not to trample you. It was a breathtaking day to say the least. Here are a few pics: 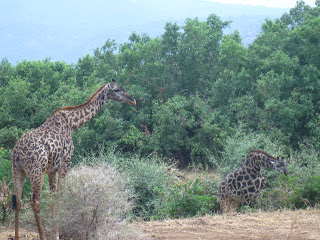 On Sunday we went into the nearby town of Karatu. We were immediately greeted by about 5 street vendors hoping to sell some local garb. I befriended one of the young boys named Azen, age 15. He took me around to all the local shops and the food market, which was basically a maze of burlap roofed stalls of fish, fruit, maize, shoes, and all sorts of things I didn't recognize. Azen was very excited to befriend an American student- we had a great time teaching each other English and Swahili. I traded Azen a pair of sunglasses for some wooden salad arms. I also traded a T-Shirt and water bottle to another vendor named Jackson for a necklace and bracelet.

Over the past three days we have been busy traveling to a Maasai and Iraqi Boma, and the local town's high school graduation.

Maasai Boma: Just East ofMtu Wa Mbu, we walk down a hillside and are greeted by 15 Maasai Mamas performing a traditional dance, dressed in their "traditional" clothing. Their children watch as the Mamas pull a few female American students to partake in the dance and song. Afterward we were given a tour of the village, which basically consisted of 25 mud huts w/ thatched roofs, a pen for cattle and sheep, a latrine, and a water source. We have been assigned to analyze tourism as it has effected and shaped the Maasai culture over the past 40 years, so at the Boma we directed our questions to the village chief's son (age 22). Some highlights were realizing that one man will usually have 6-10 wives (sometimes as many as 30!), and each wife will have their own hut and bed for the man to sleep in. I was very impressed by the Maasai homes, which are constructed from dried mud walls with sticks and fronds lain across the roof. They are extremely warm, and laying upon a cattle skinned mattress almost tempted me into a midday nap. After our tour I met most of the children (watoto) in the village. I taught them a few games and traced their hand shapes onto paper. Finally we were shepherded into their shop where beaded and silver jewelery made by the local Mamas was displayed for sale. In the end I couldn't help but feel that a majority of my interactions with the Maasai were fueled by tourism in one way or another; from the clothes they wore to the songs they sang, I don't know if they would still maintain certain practices if it weren't for tourists and their money.


Iraqi Boma:Unlike the Maasai Boma, the Iraqi visit was alot more of a show and tell, and less of a show. We were taught about how the Iraqi people brew local beer, build their houses, prepare weddings, and make pottery and baskets. This group seems to be much more conservative in comparison to the Maasai people, especially in their dress. We were eventually dressed in Iraqi attire (basically consisting of colorful shawls) and participated in a wedding dance. Like the Maasai, the Iraqi people displayed great hospitality toward us; I think much of it had to do with the $10.00 per head entrance fee we paid. I hate to sound cynical, but money is such an important and limited resource here, that it is a driving force behind most actions. Just today a friend of mine from Rhotia told me "First I must make the money, THEN I can get happiness."

Rhotia Diego Secondary School Graduation: Today we were invited by the headmaster of Diego Secondary school (basically high school) in Rhotia to attend their graduation ceremony. We were welcomed graciously by a few of the younger boys, and were fled into a huge auditorium full of teachers, parents, and students. We were 30 wazungu (white people) in the middle of about 450 E. Africans. I listened intently to understand as much as I could from the speeches (they were all given in Swahili) of the valedictorian and school board. The ceremony was capped off by a long celebration dance from another local Iraqi tribe.

Afterward I went on a long run with Reggi (the SFS site director for Tanzanaia) toward lake Manyara. I'm fairly sure (and Reggi was too) that the people we met several miles down the path had never (or barely ever) seen a white person. Most tourists either drive through or briefly stop in Rhotia, and none of them ever travel away from the main strip of shops (maduka). We ran about 3.5 miles away from Rhotia, to a place where no cars could travel. After passing any house or farmyard, dozens of children would yell "MZUNGU!" and follow in our wake, smiles and laughter steadily following us. We eventually passed a water source for many of the axillary villages which was essentially a large rusted tank holding a few hundred liters of water. The water was being drawn from a pipe which ran only a few feet below the surface, very shallow in the ground table

Anyways, it is late and I'm tired. I do have class tomorrow after all, and assignments due in just a few days.
Until Next Time

Peace and Love
Seth- a voice of adventure.
Posted by Seth Norell Bader at 11:54 PM